Anyone who knows me understands that I take birthdays very seriously. I’ve always celebrated the entirety of my birthday month, and in attempt to get my way when it comes to small, unimportant things, I’ve said to Skyler no less than a dozen times this month, “Come on, it’s my birthday month!” I fully acknowledge that I am over-the-top in how much I care about my own birthday.

We woke up slowly on Saturday morning. It was the first Saturday in almost an entire year that he didn’t have to work, so we took advantage of the very rare opportunity to sleep in on a weekend. But when I finally started to come to life, I felt like a kid on Christmas morning. My birthday surprise was finally here!

Skyler had given me a single hint (“Take off work Monday, you’ll want to sleep.”) and a critical piece of information in advance (“You’re going to want a new outfit.”). In case anyone is wondering, it’s incredibly difficult to buy a new outfit for an event and location that you don’t know, using only guidance from your husband who, despite all of his wonderful and amazing qualities, considers elastic bottom sweatpants and a matching crewneck sweatshirt his favorite outfit. So, over the past month, I ordered and returned too many options to even count, until settling on a few things that he thought might work. 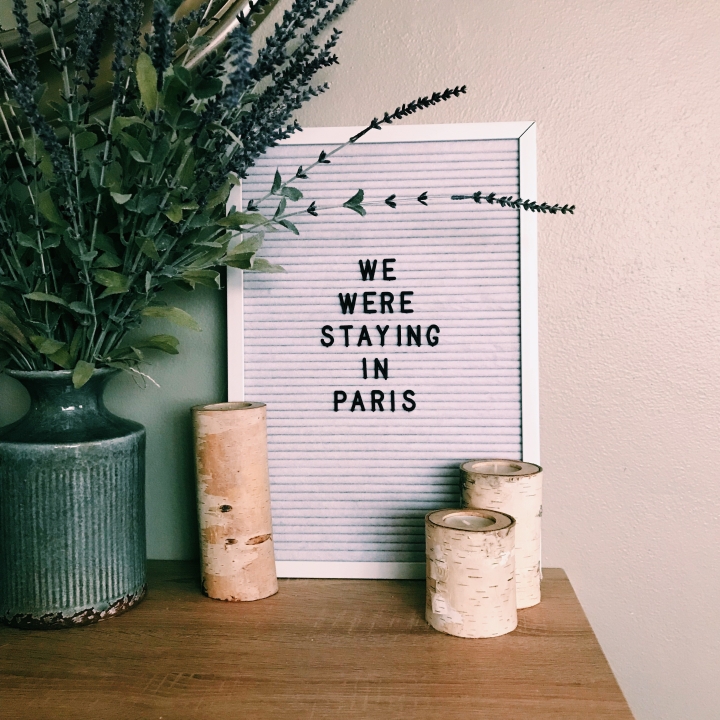 The minute I bought this letter board, I immediately wrote a cute little quote on it because, well, what else are letter boards for? When I swapped out the words a few weeks later, it took Skyler months to notice it had changed, and not understanding how these work, he asked me if I had purchased a second letter board. (I really love that man.) So, on Saturday morning, I walked by this sign at least a dozen times until I realized that the words had changed. We were staying in Paris.

Here’s the thing about Skyler’s hints: they’re impossible. I was once traveling for work when he told me he had gotten something for our house that I would be excited about. My hint? “Your aunt’s dog.” First of all, what?! Secondly, how in the world was I ever going to take such an abstract hint and draw any kind of connection? When I got home, he was so proud to show off our brand new water cooler. Don’t get me wrong, I was thrilled to finally have one because ugh, tap water, but the very first thing out of my mouth was “What in the world does this have to do with my aunt’s dog?” My aunt’s dog name was Primo, and Primo was the brand of the water cooler. Duh. Like I would EVER have connected those dots on my own.

So, in this case, the two logical things that came to mind were a) Paris, and b) The Chainsmokers. However, I also knew I’m dealing with the world’s worst/best hint-giver, so instinctively, I assumed that those two things would not have anything to do with my birthday surprise. But just to cover my bases, I did a quick Google search for The Chainsmokers concerts, only to see that they did have a show that night, but it was literally the whole way across the country. I assumed it was another one of Skyler’s weird clues. Again.

We hopped into the car with our packed suitcase, and I just hoped that its contents would be enough for wherever we were going and whatever we were doing. We headed south. 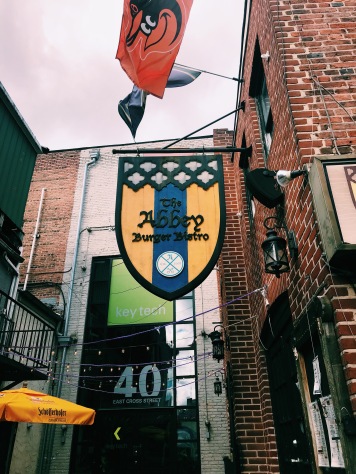 Processed with VSCO with c1 preset

Processed with VSCO with f2 preset

We arrived in Baltimore, and were having lunch at Abbey Burger Bistro, a spot that had been on my food bucket list for quite some time! Outside, a music-filled beer festival was pulsing through the streets, and I wondered if this was my surprise, even though Skyler hadn’t said a word as weaved through the crowd to the restaurant. The weather was beautiful, cool and sunny, and I had to admit – I would be pumped to spend my day drinking beer outside!

We were back in the car, heading south again. Paris, Virginia? Paris, Texas? As Skyler took the exit towards the airport, he handed me an envelope. Inside was our confirmation for a flight to Las Vegas, two tickets to see The Chainsmokers and our hotel room confirmation for Paris Las Vegas Hotel. I guess after all these years of clues that made absolutely no sense to the average human, he felt confident that an obvious hint would still go over my head. He was right – partially. It wasn’t the clue that threw me off. It was the whole who in the world flies across the country for one night to see a concert, like who are we, the Kardashians? part that really made me second guess what was happening.

Well, this is the part where Skyler’s plan began to unravel.

After revealing the surprise to me, he told me all about his original plan and how I had unknowingly ruined it. It was theatric! He intended to leave work early, texting me on his way to tell me to put on clothes that I wouldn’t mind throwing away. We’d hop in the car, drive to the airport and catch our flight to Vegas. As soon as we landed, we’d head to the mall, where I’d buy a new outfit that would be appropriate for a night in Vegas, trashing the clothes I flew in. We’d go to the club, see The Chainsmokers, stay up all night gambling and drinking and walking the Strip, until we’d head to the airport at 6 in the morning to catch our flight home. 12 hours of full on, non-stop Vegas.

So, how did I ruin that plan? Well, truthfully? By being plus size. A few weeks ago, my favorite blog wrote an article on the best places to shop if you’re over a size 12, quoting me a few times. (Small wins, people, small wins.) I sent the link to Skyler to share my victory, and we got to talking about how it’s next to impossible for me to find clothes in malls. More often than not, retailers that even offer extended sizes sell them exclusively online, and retailers that do offer 12+ sizes in stores usually have limited quantities and availability or styles that are exclusive to grandmas. So, I do literally 99.9% of my apparel shopping online!

Naturally, this conversation made him nervous about the whole spontaneous mall trip he had planned, so he came up with a plan b. He’d help me buy an outfit online before the trip, and we’d just change when we got there. Enter: the Paris Las Vegas Hotel.

Then, our flight was delayed. Normally, this would just be a slight annoyance, but because Skyler had originally had to work, our arrival was going to give us just enough time to change and make it to the club by 10:00PM. He read this article and learned that concerts in Vegas aren’t like your normal concerts. Typically, when you buy a ticket to see a band, that ticket gets you inside the venue. For us, that wasn’t the case. Because the concert was going to be at a club, it was open to the public, so your everyday Vegas party crowd would also be vying to get inside. The article said specifically to be in line by 10, so you even had a shot at getting inside the venue, even though The Chainsmokers didn’t actually come on until 1:30AM.

Thanks to the delay, we were just a few minutes late, and even still, we were (I’d guess) about 750 people back. This line didn’t include anyone on the guest list or anyone who had purchased a table and bottle service. Almost two hours later, we had moved forward and had at least made it to the outside part of the club, but with about 300ish people still in front of us. We knew that if we weren’t inside by midnight, we’d likely have to cut our losses. We made the call: either stand here, squished like sardines by total wasted strangers, or cut our losses and just do Vegas. So, we hailed a cab and headed to the Bellagio.

We caught the final Fountains of Bellagio show of the day, then headed inside to try our hand at gambling, while throwing back some Red Bull-infused cocktails. After all, it was 3 o’clock in the morning for our tired bodies. And the rest of the night went just as you’d expect a night in Vegas to go. I tried my hand at blackjack – not horrible, definitely not great. Tried (and failed) at a few different slot machines. But to me, the most magical part was our hotel. It’s been a decade since I’ve stepped foot on a Parisian street, and hardly a week has gone by that I haven’t told Skyler that I want to go back. But in this hotel, it was almost like we were there. We wandered through the Parisian cobblestone alleyways, dipping inside a boutique storefront for a quick snack. We took a seat at a bar in an outdoor cafe for a drink. Sounds reminiscent of Amelie danced in the background.

It was truly like we were staying in Paris.

We made our way back our suite, one that overlooked the glittering Eiffel Tower and was genuinely larger than our house, starving for something to eat. Besides a shared bag of Doritos, it had been since lunch in Baltimore that we had anything to eat. We ordered room service, turned on The Chainsmokers’ playlist on Spotify, and recreated the concert for ourselves. So maybe we didn’t get to see them live — and of course, we were bummed about that fact — but we had flown the whole way across the country for a single night, and we weren’t going to waste it.

Our alarm went off, waking us up from the 45 minute nap we had managed to squeeze in. The bags under my eyes were undeniable (as is expected after pulling the epic all-nighter we just had), but I zipped up our suitcase, we hopped in a cab and headed back to the airport, where we had just landed less than 10 hours before. My final birthday gift came from the Southwest gods, who let us upgrade from our lowly boarding group C positions the whole way up to A7 and A8. As exhausted as we were, the literal least appealing thing was the idea of a) not even being able to sit next to each other, and b) being stuck in the middle seat between two complete strangers on a 5 hour flight home. No way. Not interested. Gimme that upgrade. It could have cost $1,000, and I still probably would have begged Skyler to go for it.

If there’s anything I’ve learned traveling with Skyler this year, it’s that he’s the best person to have by my side when things go wrong and we’re forced to create our own adventure. (Anyone remember our honeymoon?) Instead of letting some out-of-our-control circumstances ruin our trip, he’s always down for some spontaneity and figuring it out as we go. And that’s like life, right? You figure it out as you go! I’m so, so, so wildly thankful that I get to have a husband who is also my lifelong partner in crime/travel companion/co-adventurer. Thanks for my best birthday ever.